According to the informed, the Facebook company is working on a cryptocurrency in Stablecoin type which allows users to transfer money through WhatsApp messenger. This project will be... 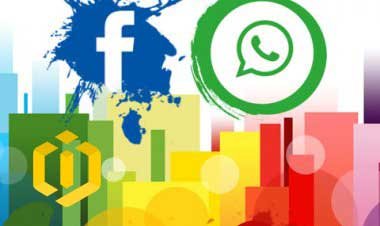 According to the informed, the Facebook company is working on a cryptocurrency in Stablecoin type which allows users to transfer money through WhatsApp messenger. This project will be launched in the Indian exchange market. The remittance transfer market is very massive there. According to the data published by the World Bank, this country received just $69 billion in 2017 from foreign transfers. WhatsApp is very popular in India, and more than 200 million people use it.

What is a stable coin?

Stablecoin is a type of cryptocurrency designed to minimize price volatilities; hence, these coins are pegged to a common currency. Facebook, too, pegs the coin it designs to Dollar. Stablecoins have a stable value. For instance, Tether is a Blockchain-based Stablecoin which is exchangeable with USD; that is, Tether is a coin with a fixed value and pegged to USD.
After recruiting David Marcus, former PayPal president in 2104, Facebook was expected to work in the field of financial services too. In May, Marcus became Blockchain inventions department president, and Facebook has not yet announced any information about it. Based on the LinkedIn page of Facebook Blockchain, about 40 people are working in this department, and Facebook is still employing people who are skillful in this field.
Last year, Stablecoin projects dramatically grew. According to Stable Report, a website publishing Stablecoins news, more than 120 investors are working on this issue. The objective of this project is to design a digital coin using it for daily purchases would be easier; since these coins are more stable than other currencies like Bitcoin.
Of course, implementing this idea is a little bit difficult and a related project in this regard which has become famous in recent weeks was stopped. A Stablecoin named Basis was stopped after eight months from project start. A company called The Hoboken, in New Jersey, told that there is no specific method to classify this currency as a guarantee and it is a drawback against the real currency. It can lead to a strong decrease in the number of buyers.
WhatsApp is not the first messenger program which will use Blockchain in its projects, some messengers have used it before. In fact, their objective in using this technology was to make it distinguished from well-known messengers such as WhatsApp and Facebook; the obvious fact is that WhatsApp cryptocurrency project is in its preliminary stage and 30 people have been working there so far.