Furthermore, it is a stablecoin based on Ethereum ERC-20 platform offered on a new website “escobartrump.org”. Its primary release number was 200 million tokens which began on Wednesday and will continue to May 10 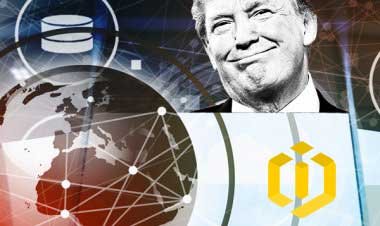 Furthermore, it is a stablecoin based on Ethereum ERC-20 platform offered on a new website “escobartrump.org”. Its primary release number was 200 million tokens which began on Wednesday and will continue to May 10

Since being elected as the U.S. president in June 2015, Donald Trump has frequently forced  Mexico to pay for building a wall at the southern U.S. border despite being understood that this plan isn't going to be practical. President Trump claims that about 90% of Americans lose the opportunity of having a healthy and prosperous lifestyle due to drug trafficking observed in the southern borders of the U.S.  This allegation is supposedly the most critical reason for him to insist on constructing a wall along the U.S and Mexico borders.
His demand was up to $5.7 billion to reach his goal and thinks that such a physical barrier between two countries can be the milestone to handle the humanitarian crisis as well as providing security for his country; although there are many opposite views on the part of Democrats.
But it does not limit to a specific party, as there observed some countries which support Mexico against the U.S.; the presidents of Peru and Colombia have announced their opposition as a reaction to Trump’s demand from Mexico to restrict illegal immigrants and drug dealing across its borders.
One of those pioneer and celebrated Colombians is Pablo Escobar’s brother, Roberto, who takes one step further to show his objection. He was his brother’s colleague, cofounding Medellín drug cartel too.

Who was Pablo Escobar?

Pablo Escobar, a drug smuggler and the richest one in the 1980s and 90s, was born in Medellín, Colombia. It seems he followed his grandfather’s job as whiskey smuggler; although, he disguised his real business through funding some charity works and even became a politician by taking a seat in the house of representatives for a short time too.

Roberto Escobar started GoFundMe campaign to raise money aiming to impeach the U.S president; however, it was applicable just for a short time due to unknown manipulations that made him show his dissatisfaction about what has been taken place. Considering the fact that there are many other Impeach-Trump efforts, it can be taken as an introduction for his future risky measure including the creation of a Dollar-pegged cryptocurrency and the launch of an ICO, called ESCOBAR knowing that there is surely no way to censure cryptocurrencies to help recurrence of what GoFundMe had experienced.
Furthermore, it is a stablecoin based on Ethereum ERC-20 platform offered on a new website “escobartrump.org”. Its primary release number was 200 million tokens which began on Wednesday and will continue to May 10. It is not his first attempt in the field of cryptocurrency, though; as he had formerly issued another crypto called “dietbitcoin” the value whereof was diminished soon. The estate mission is to change ESCOBAR to a strong rival for popular stablecoins like Tether (USDT).
This event sounds like a reaction to Trump’s policies regarding the aforementioned wall and what the Mexican president stated about not supporting this autocratic decision. Escobar’s view is clearly expressed in the front page of Impeach Trump Fund website by an implicative picture from Trump concomitant with the following sentence: “I AM SCARED OF PABLO ESCOBAR”.
A part of the money earned through issuing ESCOBAR will allegedly be allocated to hire professional and feckful lawyers and lobbyists, though the fund will be in ESCOBAR with no dollar convertibility potential until June, carried out by a company located in Belize. Some other part of this amount will be specified to collect intelligence to carry on a better impeachment process. The hidden fact might be Escobar’s brother effort to take advantage of the situation on his favor to improve his token and its usefulness.
Simultaneous with what is going on about offering a new Token and fundraising to criticize Trump, some other attempts by a Special counsel, Robert Mueller in finding out some cases of laundering drug money by the U.S president while he had completed the construction of his “Trump Ocean Club” can be helpful in reaching their ideal target.
The objective of that futile campaign, committed as a purposeful action done by Trump Administration, was to raise about $50 million, according to Olof Gustafsson, CEO at Escobar Inc. in a report by Next Web. Now that they have released this new cryptocurrency hoping not to be intervened by any external force, they expect to sell 1 billion ESCOBARs.
The faults proposed against the U.S. do not put to an end. In a book authored by Roberto Escobar himself, it has been claimed that there is no factual Satoshi Nakamoto; rather, they are all created and controlled by CIA; that is, CIA is Nakamoto.
The success or failure of such ventures in the field of cryptocurrencies is not explicit, especially the ones whose result is engaged in political strategies.