The aim of White Paper Bitcoin was that money concentration would not be within the control of a government and a decentralized to... 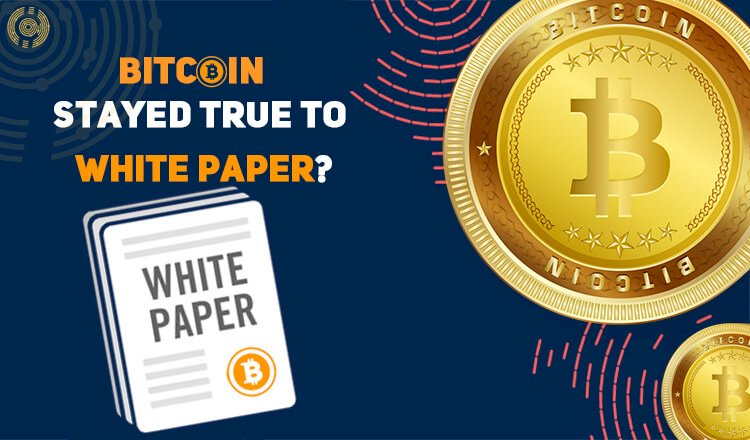 What is Bitcoin? Did Bitcoin stay committed to its Obligations?

The main Bitcoin article titled “Bitcoin: A Peer-to-Peer Electronic Financial System” was released on 31st October 2008. This article, which is called white paper, was written by someone or some people anonymously, named Satoshi Nakamoto. That was a starting point for Bitcoin. Nakamoto described in it what Bitcoin is supposed to do. Months after releasing it, Nakamoto wrote the Bitcoin’s main program based on that. In that white paper, Bitcoin was introduced as a type of electronic money. First, we will examine what Bitcoin has supposed to be and then, see what happened in the action.

Bitcoin was introduced as a monetary system that builds trust through Blockchain technology, proof of work, and cryptography. It means individuals can make consensus decisions over some information without needing to trust each other, solely by trusting Bitcoin code (in a way, it can be said that Bitcoin is a solution offered by Byzantine generals).

This solution was supposed to be decentralized and each CPU would have one voting right. It was supposed to be priced based on being operational, the increasing need for using this cryptocurrency, and regarding its rather small distribution (altogether 21 million units). Mining was supposed to be performed by the CPUs and nobody was to have exceeding power. The aim was so that money concentration would not be within the control of a government or institutions and a decentralized network to be formed to produce and transfer money.

Now let’s review whether these terms have been executed as it was in the white paper of Bitcoin.

Computer CPUs were supposed to engage in Bitcoin mining and it would not be done industrially and based on individuals’ will. Practically, ASIC machines are mining and legal entities with one CPU have no right at the network. This led to Bitcoin’s control power to gradually be taken out of ordinary people’s hands and in the hands of who performed industrial mining.

We have shown in the previous section that unlike proposed premises, Bitcoin is not currently a decentralized network, and the majority of the network displays intense concentrations at different levels.

The longest chain at the white paper is chosen as the right chain which practically has seen to be wrong. On 11th March 2013, following some software issues, the network was halved. This problem was solved after 24 blocks and by different people’s coordination but the important matter is that this problem wouldn’t be solved naturally and without any intervention.

First, each Bitcoin block was giving 50 Bitcoins as reward to the miner who builds the right block. This amount is to be halved every four years. This is not clear yet what happens to the Bitcoin network in case of decreasing rewards when mining is not frugal. The answer given to this question is that then Bitcoin transaction costs will be enough for the miners. In such circumstances, the costs of using Bitcoin will be so high that using the network practically won’t be possible. In this case, considering the increased number of Bitcoins, will a new reward be given to the miners? This is the exact problem which existed with printing fiat money. This is specifically what Bitcoin tried to solve and now it is turning to become the same problem.

In an article, a group of Princeton University professors did not recognize Bitcoin as a balanced and sustainable network addressing the items above.

It was supposed that different people in the network would have equal power, or in other words, to be peer-to-peer. In action, now mining pools that confirm the transactions and make the blocks, possess much more power than ordinary individuals, and being peer-to-peer is not true anymore.

Regarding putting aside CPUs and advancing of ASIC machines, the rate of network electronic consumption has grown exponentially and in fact, this energy is being wasted for nothing; a waste which could be prevented by a better protocol regulation.

Unlike the primary propositions of Bitcoin, instead of being one of the payment methods, it is used for maintenance and expectancy for someone buying it with the highest price in the future. In fact, the Bitcoin pricing method instead of being based on its usage is based on the greater fool theory (this is only an example).  It means everyone who keeps this property is hoping someone comes and buys it at a higher price.

Chainalysis data is indicating that only 1.3 percent of transferred Bitcoins were done so for economic activities and the rest of Bitcoins remain unused. Charles Hoskinson is one of the old Bitcoiners and a member of Ethereum creating team and has provided the Cardano (ADA) cryptocurrency. He tells a story in a blog post. He and his friends were getting back from an Ethereum creating meeting and went to a café. Surprisingly, they realized that the café accepts Bitcoin as a payment method. But Hoskinson’s friend demands to pay cash claiming that Bitcoin is too valuable to spend. Charles writes: then I realized that Bitcoin will not be used as money just like its designer’s wish, Satoshi Nakamoto and another cryptocurrency should be sought.