In this article, we discuss the statements made by Puya Chamer, the founder and CEO of Counos Platform regarding an elections system that is based on the Blockchain technology. 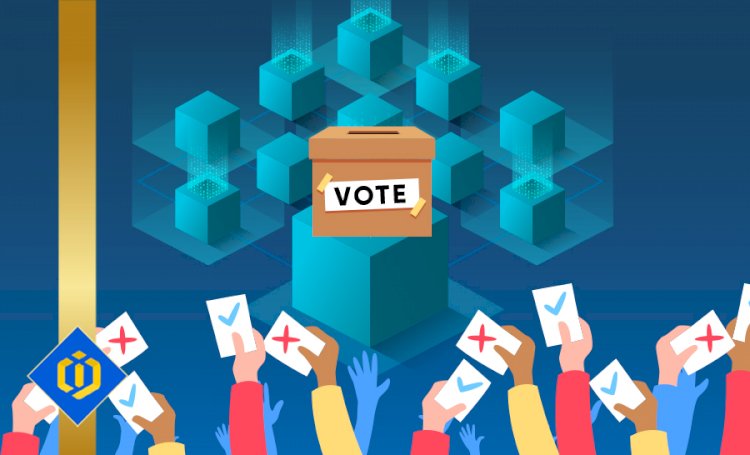 The foretold visions of a Blockchain incorporated world are becoming ever more true as this vast technology is being unfolded before our eyes. The real world implications of this new domain are being announced by different organization, cities, and governments in various forms and types, such as the assimilation of this technology into administrative tasks and affairs like keeping health care records or even the entire real estate information of a country.

However, one of the most promising potential functions of the Blockchain technology has to do with the foundation of all democracies around the globe – i.e. elections.

The Blockchain technology can be used to develop a system to hold an election via a voting system that is defined as a smart contract. In this smart contract, the different choices or different candidates would be identified with a unique address in the network.

The outstanding advantages of a Blockchain-based voting system used for any elections can easily be surmised – the sheer speed of the process, absolute transparency for everyone to be able to observe the unbiased process of voting, the tamper-proof nature of Blockchain technology making sure no outside influence can change the end result of a fair and free election, cheaper costs of holding large scale elections, and many other upsides.

This is what has been announced by Puya Chamer, the founder and CEO of Swiss based Counos company. Counos has developed a system based on its Counos X cryptocurrency that allows for the holding of elections in a transparent and tamper-proof manner that can be easily administered.

An important part of the unveiling of the Counos Blockchain-based election system is that the first phase of Counos X election system would be to use it for holding Blockchain-based elections in the country of Switzerland. Furthermore, it is being developed in its scalability so that it can finally be used for the largest scale elections, such as United States presidential elections.

In such large scale elections, the volume of transactions and the speed of confirming transactions is very important. As such, Puya Chamer has said that Counos is currently working on this system to increase its scalability and capacity in a way that it will be able to process and register 10,000 transactions per second.

How Is Blockchain Advantageous for Holding Elections?

A Blockchain-based election system would naturally bring all the benefits of this technology to the processes of an election, including candidate registration, voting, and more importantly the counting of the votes.

At the end of the voting process, the account whose balance comes from the source that had already been defined in the Blockchain network and specified in the smart contract will determine the candidate or option with the highest number of votes.

More challenges must be considered in this system and a solution must be offered for them.

So, it is quite clear what advantages Blockchain technology can have for the voting process and elections. But can any Blockchain network be used for this purpose? Puya Chamer has a different opinion and has made the following statement in this regard:

“However, it is crucially important to note that when I talk about the use of Blockchain technology and a Blockchain network in holding elections, I do not mean that any network can carry out this task. Counos has specifically designed the network of Counos X to have the capability to hold elections. This is exactly why other Blockchain networks won’t be able to carry out such large scale elections.”

Most of the Blockchain networks that are in the market and are used for cryptocurrencies, have a limited capacity in each block for processing transactions, and most of the available space is already filled with ordinary transactions, it would not be possible to use networks such as Bitcoin and Ethereum.

Since the number of voters can sometimes be extremely high, for instance in the case of the last US elections where more than 150 million people participated in the election, the network should have the capacity to process few million transactions in a day.

In other words, in this massively large scale election, up to thousands of transactions should be recorded each second. If we want to prepare the system for the peak influx of votes, it should be ready to cover a substantial number of transactions each second, such that no other Blockchain network is capable of doing so. So, to counter this issue, Counos is developing the Blockchain network of Counos X election system to be able to process 10,000 transactions per second.

Furthermore, another reason that existing public Blockchain networks will not be able to hold large scale elections is that they do not guarantee that the sent transaction will be recorded in the first available block.

Given the network’s traffic, the transaction fee, and perhaps other defining parameters, the time of a transaction being recorded in a block can vary. This is considered a challenge for an operation that needs to take place and finish at certain times, especially something as time sensitive as voting.

In addition, the administration and holding an election will include determining candidates, verifying the identity of voters, preventing duplicate votes, and preventing fake voters. In addition, as mentioned, existing public Blockchain networks do not provide viable solutions for these challenges. Therefore, current conventional structures need to authenticate these matters.

So, it is clear that not just any Blockchain network can be used to successfully hold an election. But let’s see how Counos X elections system can hold up its promises.

The founder and CEO of this Blockchain platform, Puya Chamer, has stated that in order to solve all the challenges that were mentioned above, Counos platform has offered the Counos X elections system. The structure of the Counos Blockchain network is being updated to be able to process at least 10,000 transactions per second. This volume of transactions can meet the needs of large election systems, for example presidential elections or even referendums.

Furthermore, in order to guarantee the safety and security of the network, certain steps have been taken into consideration. For instance, all the active mining pools in the Counos network should meet a certain criterion to be able to mine blocks (including the minimum amount of credit as specified in system’s rules). On the other hand, network difficulty is controlled using special formula. All these make it harder for a 51-percent attack to occur. Additionally, they prevent the changing of rules and so unknown pools cannot exist. The details of created blocks in each pool can be reviewed in a public and transparent manner.

In any voting center, a new and exclusive address is given to any voter in addition to the right to vote (a certain balance of CCXX coins). The totality of these balances come from a certain source which are provided to be constant for all the election transactions. This balance is sent to an exclusive address to each voting center, which will then be used in the process of elections by voters. In any election system, there is an ID for any voter (this ID can come from the national ID number). This ID is registered as a separate transaction in the Blockchain in the form of a message when the voting right is transacted. This is so it becomes fully transparent who has used their voting right already. The registration validity of this ID should be authenticated by the organizers of the election outside the Blockchain network based on the number of the registered IDs in certain time periods, the balance of the voting center’s wallet will be recharged.

Transferring votes (special balance in the exclusive address) can be done via special voting wallets. Transaction ID and raw transaction are shown in the form of a QR code which can be recorded. In this way, any voter can make sure of how voting takes place.

As the voting process ends, the balance of voting centers and the main center will become non-transferable. Although, a certain time period in order to guarantee all the transactions are fully received (by the chosen candidate’s account) will be taken into account.

A special block explorer will be dedicated to this system. All the valid votes will be shown in this explorer. The votes that are cast outside the defined time period or come from unauthorized sources, will not be counted as part of the final balance, and in the end the valid results will be announced.

These were the details provided by this election system developed by Counos and announced by Puya Chamer, which can be implemented to carry out any election, from smaller scale ones, such as city-wide elections, to larger ones, including parliament and presidential elections.

Digital Euro to Preserve the Role of Public Money